For this article I figured I would talk a little bit about some of my favourite cards in the game. None of these cards are going to be in any particular order, they’re just ones that I find fun and/or interesting. So without further ado let’s get to it!

A common out of the Green Arrow / Flash set this card helps to fill two roles in any deck that utilizes a Bolt or Shield character. It’s a great form of removal when using it as an action die allowing you to deal damage equal to one of your character dice to any other character on the field. Two things stand out to me with this card; one is that a character of yours deals damage to another character; the other is that you can deal damage to any character on the field, even your own. This makes a card like Mr. Freeze – Deep Freeze a little more playable as you can damage an opposing die with him without having to attack or block. In golden age you can combine a high attack Bolt or Shield character with Jocasta – Patterned After Janet and deal huge damage directly to your opponent. The other use for this card, which works in any deck, is its Global. By paying a Bolt and a Shield you get to move one sidekick from your Used Pile to the Prep Area and one sidekick from your Used Pile to the field on their 0-1-1 face. An important thing to note with this is you can use the effect even if you only have one sidekick in your Used Pile. You simply do as much of the effect as you can, which in this case would be to move a sidekick to your Prep Area. This ability helps to ramp up your deck, throw out a blocker on the field, and fill a gap left by Professor X if you’re playing modern. Rocket Raccoon – Not a Raccoon

I have a bit of a love/hate relationship with this card. I love it because it is a great value for your resources. I hate it because I never want to buy anything other than it until I’ve bought all four copies that I will run. He’s great ramp if you’re running higher cost Bolt characters, plus he’s fantastic on his own. He will consistently deal at least one damage to your opponent every turn, although you take the same. The only weak part of him is his Level 1 face, and even then you may be able to swing through and deal two damage. Another thing I like about Rocket is that he combos quite nicely with my above card, the S.T.A.R. Labs. Together a Level 3 Rocket with S.T.A.R. Labs could knock out a pesky blocker and swing for five damage. Two low cost dice for a potential 1/4 of your opponents life, that makes me happy. The only real downside to running this version or Rocket and not his other 2 cost (same stats, no effect) is when you have less life than your opponent. You’ll be holding him back as a blocker then so you don’t dig yourself further into a hole. 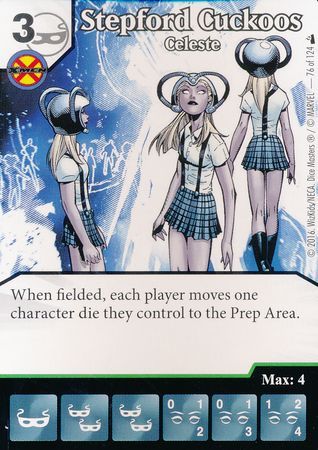 Here is a card that I thought was both strong and balanced as soon as I saw it. Although it doesn’t allow you to target your opponents die to get send to the Prep Area it can still cause some complications for them and nice combos for you. If you just want to continuously remove an opposing die from the field every turn you can just use Celeste’s effect on herself and send her to the Prep Area every turn. Or you can combo her with anyone with a “when fielded” effect or “Back For More” ability. By using other forms of removal in conjunction with her you can actually get a fair amount of control over what opposing die gets sent to the Prep Area. The flexibility and utility of this card make it one of my favourites. 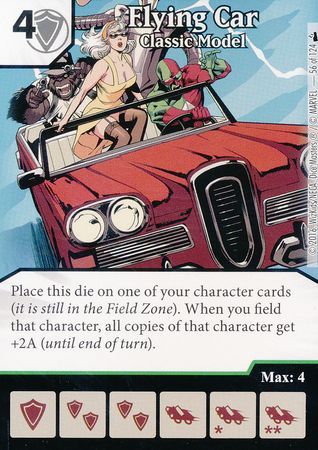 Another card from the Deadpool set. This card is a great action to combine with a low cost attacker that you run multiples of. This die, when it lands on an action face, goes onto a character card of yours and whenever you field a copy of that character, all active dice of that character get +2A. One of my favourite combos with this card is the 1 cost Morphing Jar from the Yu-Gi-Oh set. In fact I call one of my decks “Morphing Jar in a Flying Car.” Using this card you can either store up a big attack by buying and summoning a few copies of one of your favourite dice, followed up by tossing them in the Flying Car, summoning another copy and swinging for the fences. Or my favourite way to work this card is by rolling multiples of the character in the Flying Car and then fielding them one after another. The first one gets really big and each subsequent one gets bigger, but not quite as big as the previous one. This can make for some seriously difficult to deal with characters. Also if you combine this with a Bolt or Shield character and S.T.A.R. Labs, you can use the Attack boost from Flying Car to make your S.T.A.R. Labs action that much larger, allowing you to take down bigger characters with ease. 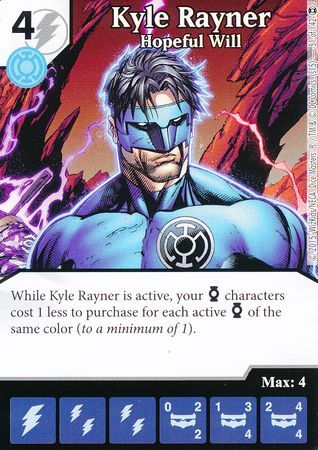 Here is a character that makes any Lantern deck a lot better and a lot faster. His ability lets Lantern characters of the same colour as a lantern already on the field cost one less for each Lantern of that colour on the field. This only counts if the character is active, not how many dice you have of that character in play. So even if you have 3 dice of a single Lantern character in play it will only lower the cost by one. Still that’s nothing to scoff at. A single Kyle Rayner can make the 5 cost The Flash or Saint Walker more playable by bringing them down to a cost of 4, thus making it not necessary to have more than your base roll for a turn. Combined with Green Lanterns you can start buying Hal Jordan’s and Mogo’s with just a standard roll for a turn. You may even be able to bring the 6 cost Mogo down to 1, which is incredibly powerful. Paired with Red Lanterns you can start getting really aggressive with Guy Gardener’s and Supergirls. Getting an 8/7 Overcrush character for 4 or less is incredibly strong, and it’s made possible with Kyle Rayner – Hopeful Will.

Well there are a few of my favourite cards at the present time. Next time I will talk about some of my favourite Basic Action Cards. Hopefully this gave you some ideas for your own decks and will help encourage some creative thinking. I’m always a fan of things that have synergy and can combo so that’s largely what I look for in a card.

Thank you for reading, and keep the dice rolling.