Blog - Latest News
You are here: Home / Games / DiceMasters / Back to the Basic… Action Cards 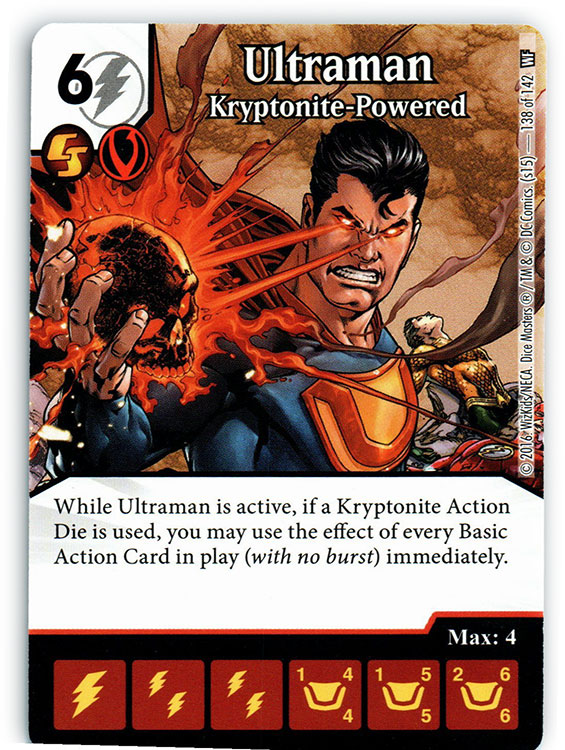 Since last week I talked about five of my favourite non-basic action cards, I figured this week I’d talk about five of my favourite basic action cards. For those not in the know, every deck must contain two basic action cards and their dice can be purchased by either player. They can provide many useful effects but just be aware that they could be used against you. There are also some cards that can use their effects without having purchased and rolled an associated die. Ultraman – Kryptonite-Powered from DC Worlds Finest is a great example of a card that can do this (and also a great card to build a deck around.) With that said, lets get on to the topic at hand, my five favourite basic action cards in no particular order. 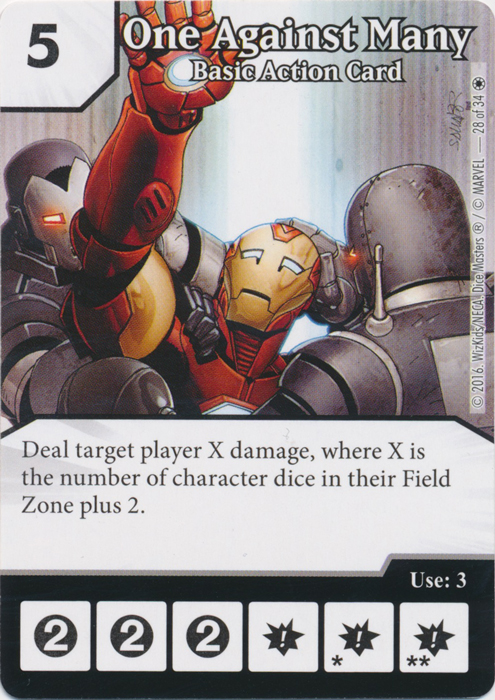 Here is the newest card on the list and the one I’m kicking it off with. This became a new favourite of mine when I busted it out in a new deck and found it to be quite powerful. Just by reading it you may think that it’s quite expensive for its effect. 5 cost is rather high for any die, let alone a basic action die, and for 5 you could be getting a Delayed Blast Fireball to wipe your opponents field with. However, whereas DBF may be great in a more aggresive deck, I think that One Against Many has a great spot in a more control/defensive deck. At worst you do 2 damage, which is the same as a Magic Missle. However it’s very unlikely that your opponent will have no characters on the field, you’re much more likely to get 5-7 damage with one of these which is a much better value proposition. If you’re opponent is running something like sidekick swarm then you could potentially hit for half of their life with one die. That’s nothing to scoff at and is why I’m including it in this list. 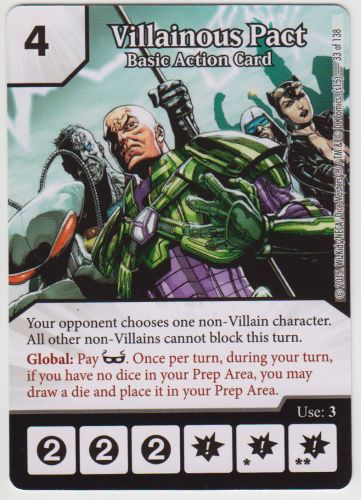 Here is a card that is well deserving of it’s spot on any list of this sort. Villainous Pact is primarily played for it’s Global ability which allows you to draw a die from your bag and place it in the Prep Area so long as you don’t already have any dice in your Prep Area. This effect is yours for the low, low price of 1 Mask energy. Having access to easy to use ramp is always a good thing and this card, especially combined with Resurrection (similar effect for 1 Shield) can allow you to prep extra dice every turn. However, even though its Global is awesome, let’s not forget about its rolled effect. For 4 for a die you get the ability to prevent all of your opponents dice from blocking with the exception of one. This effect however is useless against a villain deck and you should probably forgo buying any of these if you find yourself opposite one of them. This card can be a real boon in an agressive deck and can easily help you swing for a game ending, or at least tempo shifting, attack. 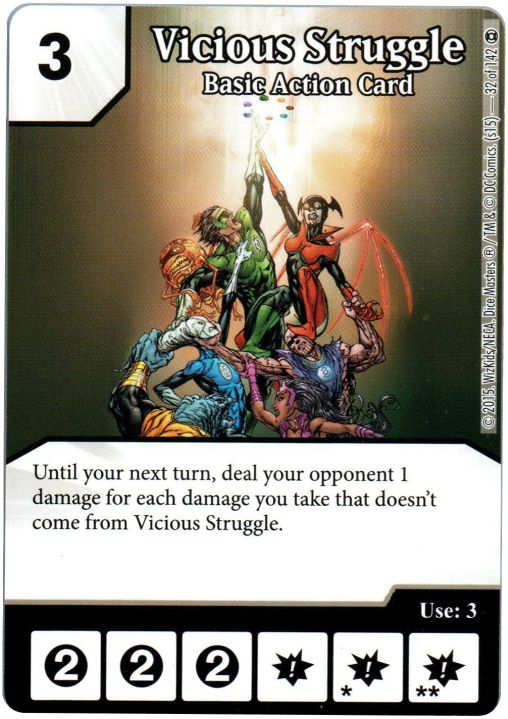 If any card is made for a combo, it’s this one. With Vicious Struggle, any damage you take until your next turn is also dealt to your opponent. Keep in mind that this includes damage you deal to yourself as well as damage done to your opponent. A simple combo with this card is the basic action card Fireball. Fireball will deal 2 damage to each player and character on the field, so with Vicious Struggle active you will take 2 damage, all characters will take 2 damage, and your opponent will take 4 damage. That’s just a very simple combo with this card and I will leave it up to you my readers to come up with more. Needless to say this is one of my favourite cards because of it’s heavy combo goodness. 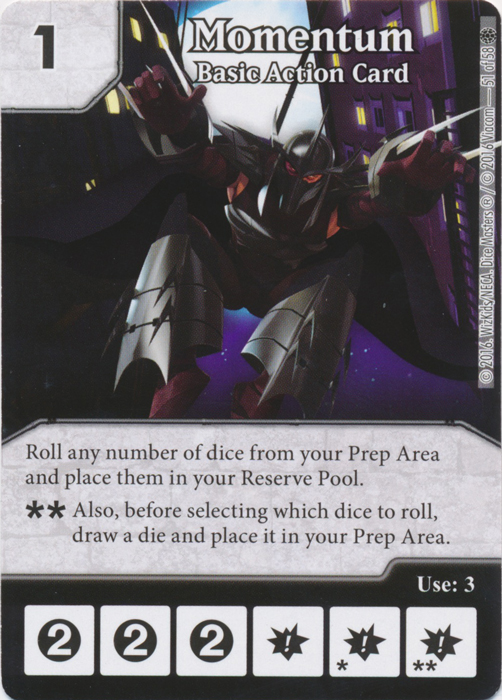 Another of the newer cards on this list, Momentum comes to us from the TMNT: Heroes in the Half-Shell set. This card is notable for being only one of two 1 cost basic action cards, both of which have come from TMNT sets. I think this one is much more useful than Pizza because I like its effect more and it doesn’t have a life point limit on it. The effect on this card is quite useful, especially if you can hit the double burst face. Being able to roll a die from your Prep Area can be quite useful, and being able to prep a die before rolling from their is great too. However I think that the biggest use for this card comes from the simple fact that it costs 1. If you go first and roll all three dice as energy faces, I wouldn’t consider buying up all three copies of this card to be a bad move. You just added three dice to your bag that can potentially roll a 2 energy face. This card provides some solid ramp and a decent effect into a cheap cost, I like it. 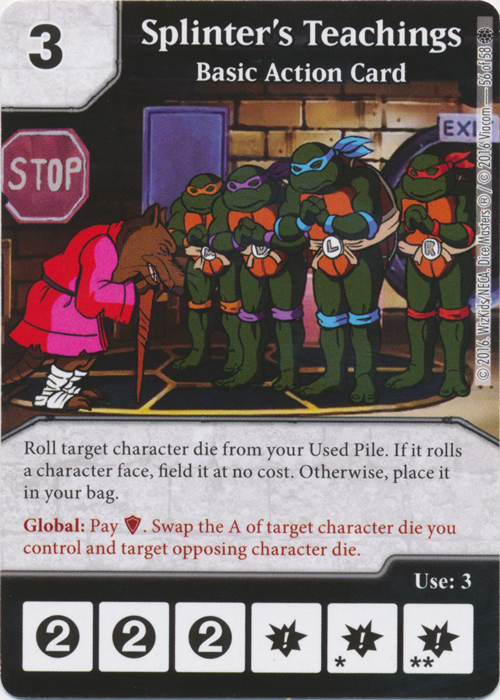 This card is a reprinting of Transfer Power from the Uncanny X-Men set, this card comes to us from the same set as Momentum, TMNT: Heroes in the Half-Shell. The effect you get from rolling this die is quite strong. Any ability that lets you not only get a die out of your Used Pile, but also roll and potentially field it for free, is quite strong. With that said, there is always the chance that you either won’t have an eligible die (sidekicks don’t count) in your Used Pile, or you may end up hitting a non-character face on the die you do roll. In either case the action is largely wasted and your down one die for the turn. However when it does hit a character face, then you’re sitting pretty. My favourite part of this card has got to be the Global ability. Paying 1 Shield to swap the attack of one of my characters with that of an opponents is fantastic. You can use this effect after attackers and blockers are declared, so I love attacking, then swapping the attack of my opponents largest creature with that of one they let through. Smacking an opponent for 5+ with a sidekick is a lot of fun and very satisfying.

Thanks for reading, keep the dice rolling.

Was once surprised that he ate the whole thing. Big into Dice Masters and board games. Would like to get into the Final Fantasy TCG but nobody has stock to sell.

Latest posts by Bob (see all)

Want to join the discussion?
Feel free to contribute!